About me and my work

A few words about myself.

I was born in St. Ignace, Michigan in 1974, in what I imagine was a cold, windy morning and have been making marks with something on paper or canvas almost ever since.

Although I’ve followed the conventional path through art education-receiving a Master of Fine Arts (MFA) from the University of Arkansas and a Bachelor of Fine Arts (BFA) from the Columbus College of Art and Design- it has been the side paths to both the pursuit of making art and a living which have really informed my work. For most of the past 20 years, I’ve spent living and working between Alaska and Asia. 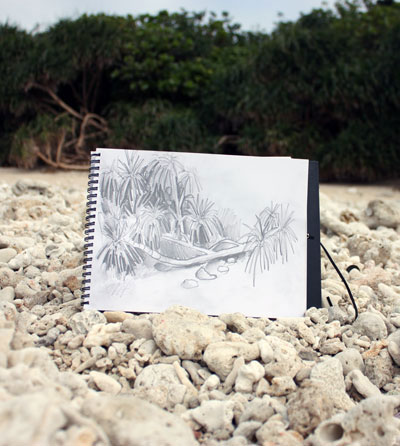 Over the past two decades, I have exhibited across China, Taiwan and the United States and held ten solo shows as well as participated in more than 30 international , national and regional juried exhibitions .

A highlight of my career came in 2010 when I was awarded a Fulbright Fellowship in which I used to spend ten months researching (snorkeling and diving) the Kenting Coral Reef of Taiwan. The project materialized as an exhibit of paintings at the National Museum of Marine Biology and Aquarium of Taiwan. I have also exhibited at the Arkansas Arts Center , the Baker Exhibition Center of the North Carolina Arboretum, the Smoyer Gallery of Roanoke College and many more.

I currently live and work in Zhuhai, China where I am an Assistant Professor of Art & Design at United International College, Beijing Normal University-Hong Kong Baptist University. I spend each summer on the water in Alaska where I own and operate a commercial salmon fishing operation.

A few words about my work.

While I approach art philosophically from a modernist perspective corrupted by historical hindsight, I make my work with an idealized nostalgia of medieval craftsmanship.

The making of my work is a restless process in which the outcome is a visual resolution. It is fuelled by the challenge I find in integrating opposing materials, treating painting both as an object and window, tradition and experimentation, representation and abstraction as well as the juxtaposition of time in a historical sense. I find creative energy in contrasting and conflicting ideas, materials and traditions.

These dichotomies manifest themselves metaphorically in the studio through laborious and meditative applications of repetitive mark-making, the layering of materials and paint, sometimes being complimentary and sometimes conflicting. The end result is often an object with dense surface qualities of vibrating color.

Personal connections to my subject matter is one binding characteristic my work has held true to as it has evolved and changed over many years. I find validity in my work through direct observation, personal experience , memory and/or historical readings which I often utilize in my work to connect to human constructs of value, preciousness and wonder applied to nature.